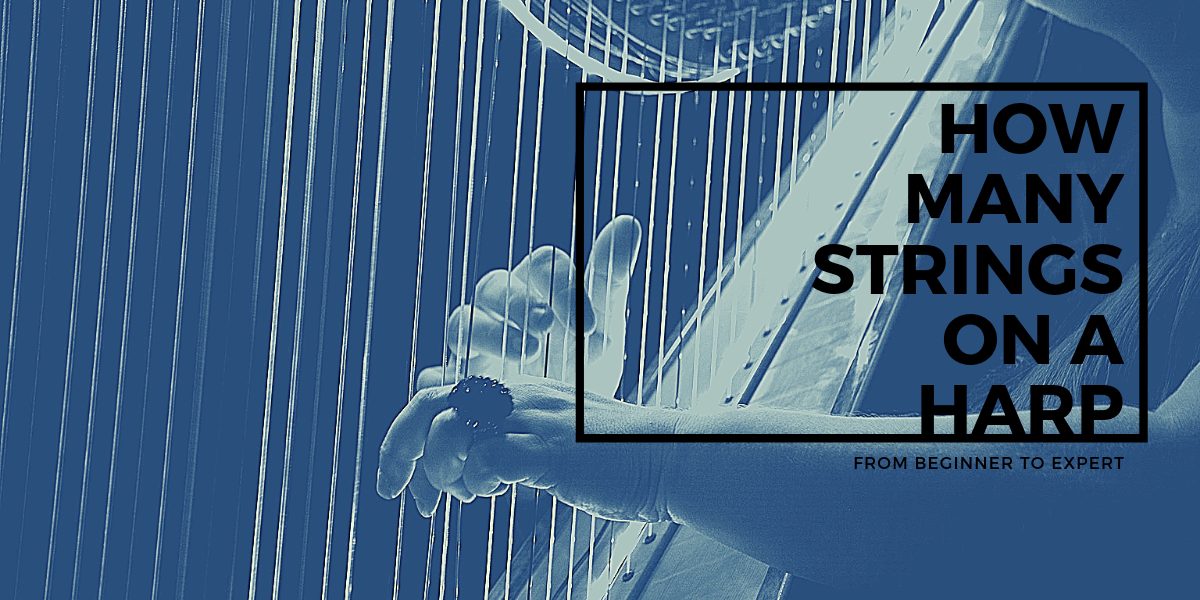 We wanted you to have the most simple and direct way to get this information as possible so we created this reference guide to see how many strings are on a harp.

First thing is first, how many strings does a harp have? A modern harp usually has about 47 strings.

There are different types of harps, such as the pedal harps, lever harps, and many more.

However, harps vary in terms of their sizes and style of construction.

There are smaller harps that harpists play placing on the laps while others are very large and heavy, such are played placing them on the floor.

A harp is a musical instrument made of strings running to its soundboard at an angle.

Harp strings are very vital in all harps since they are plucked to produce sound. They also determine the kind of sound the harp makes, whether high or low sound.

To play the instrument that most people call angelic, the harp is a daunting task. Of course, talent, determination, and enthusiasm play a role when you are trying to learn any musical instrument.

When it comes to harps, there is another factor, namely the number of strings.

There are many types of harps, each with its own set of distinct features and most important of all, number of strings.

Knowing how many strings does a harp have, could answer your question about the time needed to learn to play it.

The short answer is that it depends on which type of harp you are talking about. I here is a quick list of most of the most commonly used harps and how many strings they have.

Broadly, we can differentiate between the two types of harps - lever harps and pedal harps.

The lever harp has around 34 strings

The lever harp has levers on the top of each string that allow the harpist to play two different notes on each string. To reach the levers you have to use your hands.

This can lead to more complications and mistakes while playing since you have to rely on your hands to both play the notes and adjust them. They are mainly used by beginners.

Serious students of the harp usually advance from the lever harp to the pedal harp.

The pedal harp usually has between 46 and 47 strings

The pedal-type of the harp, as the name says, has ditched the levers on top for the pedals on the bottom of the instrument. In total, there are seven pedals that help you adjust the notes that you are wanting to play.

Each pedal has three distinct positions, which increase the range of the notes played. Unlike the lever harps, there are no limitations on the pedal harp.

The harpists can perform every piece of music that comes to their creative mind. The biggest advantage the pedal harps have over the lever harps is that you adjust the pedals with your feet.

This means that you can focus your hands entirely on playing.

There two are modern harps, but there were many types of harps before them.

There are also other types of harps that are used in these modern times of ours. Some of the more popular are the Celtic harp, a multi-course harp, and electric harp.

The Celtic harp has around 22 to 38 strings

These harps have gotten their name from the region where their revival took place.

They are quite varied and can have a range between 2 and 6 octaves. The smaller, lap Celtic harp has 22 strings.

The bigger, floor Celtic harp has about 38 strings, a bit short of the 35-37 strings of the modern pedal harp.

As the name implies, this type of harp has more than one row of strings. In most cases, there are two rows, but some can come in three rows as well.

In the double coursed harp, the strings run down the neck on each side.

They are parallel as well as strung to play the same note. On average, the double harp has 23 strings on each side, which means it has a total of 26 strings, much like the modern pedal harp.

In most cases, the electric harp is a lever harp, even though some newer models are also pedal harps.

The true electric harp has a solid body, unlike the acoustic version which has a hollow body. The number of strings on the electric harp ranges from 40 to the standard 47.

Another ancestor of the modern harp that had its central role in the cultural life of its time. The lyre is one of the most famous instruments in the period of ancient Greece and Rome.

It was even thought of as the instrument of the gods. As time progressed so did the lyre harp. The instrument started out in the Mycenaean culture with 4 strings.

Eventually, that number increased to 8. The final version of the greek and roman lyre had 10 strings. The evolution of the instrument is hard to follow.

One such was Plutarch who claimed that the number of strings in his day was 3, even when archaeological findings, like pictures on vases, show that lyres had 8 or more stings at that time.

The lap harp has around 15 to 22 strings

By the end of the 9th and the beginning of the 10th century, the shape of the hard started to look similar to what we have today.

But those harps were not the size of or the space of the harps of today. Most of them was a rectangle or triangle.

They were primary wooden and portable. In most cases, they were as big as an average forearm.

Musicians, in most cases, were travelers in those times, apart from those who gained the favor of wealthy and influential lords or kings.

That is why their instruments had to be light enough but also sturdy enough to travel throughout the lands.

The lucky harp players in those days were quite popular. They were almost as famous as lords or knights.

Their harps were carved in extravagant shapes, some even decorated with noble stones or metals. In most cases, the medieval harp had 10 strings, made out of wire or hair.

What Are Harp Strings Made Of?

You may be wondering what are these strings made out of right? So let’s answer that.

Harps also vary in the style of construction in terms of the materials used to make their different parts. Different harps use different materials for their harp strings.

Harp strings can be made using gut, nylon, carbon, wire, or metal. This article will give an in-depth discussion of the different materials used to make the harp strings.

The gut is made using animals gut. It can either be concert gut or level gut

Concert gut is mostly used on pedal harps. It is firm and produces a warm tone. Their firm tension necessitates those harp players using gut-stringed harps to have strong hands.

Gut harp strings usually produce a very warm sound. They are very sensitive to humidity and thus require users to have their harps frequently tuned.

Additionally, gut breaks easily, usually because it is a natural substance, and therefore, its tensile is lower compared to materials like nylon.

This string material is synthetic, and strings made from it are either monofilament or nylon wrapped.

Strings made from monofilament nylon usually produce a warm and clear sound. They are also not very sensitive to humidity.

Nylon wrapped strings refer to monofilament nylon strings that are wrapped with another nylon layer.

They also produce a bright and warm sound but are more sensitive to humidity compared to the monofilament nylon.

Strings made from nylon are long-lasting, mainly because nylon material is synthetic. They produce a sound not as warm as the gut harp strings.

Additionally, they are not as sensitive to temperatures and humidity like the gut harp strings.

This string material is made using polymers. Strings made from carbon are stable, light, and not sensitive to humidity.

They produce a sound that is warmer and brighter than the nylon strings but not as rich as what gut strings produce.

Wires are from various metal types, including gold, silver, bronze, and steel.

Bronze strings have a crystalline structure and break easily. Steel strings, on the other hand, are stronger and do not break easily.

Different molecular structures in every metal cause a difference in the type of sound a harp produces. Usually, steel harp strings produce a rich sound.

Material In Each Harp

Most Harps use the same types of strings. Gut strings are the most common in lever harps. Other materials such as carbon and nylon can be used in some lever harps.

So now you know how many strings are on the specific harp you have or want to know about.

Also, you have learned that about every type of harp has various amounts of strings that they may carry and that it’s not specific to the type but it’s really just up to you and your preference and needs.

We hope this reference guide has been helpful.