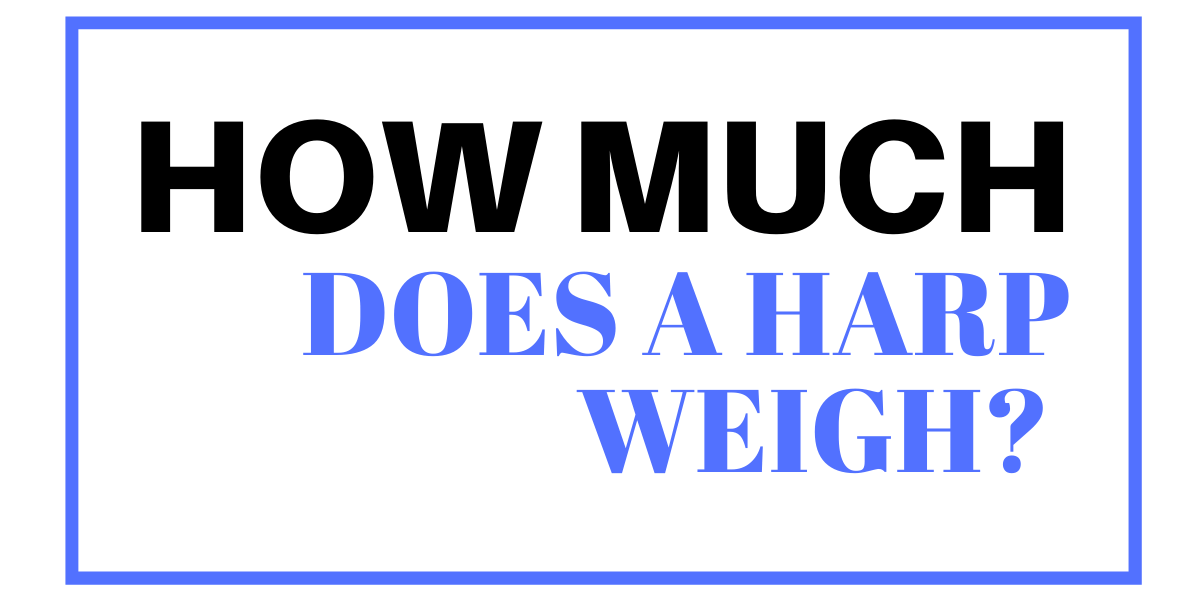 When it comes to getting started with harps, a common question for many people is “how much does a harp weigh?”

Well, there is no definite answer to that question since harps can vary extensively in size, weight and many other factors. Though, pedal harps, which are some common types of harps, weigh between 70 to 90 pounds.

Different Types Of Harp & Their Weights

Harps can be split into different categorized, depending on their size, features, design and history.

That said, here are the most common types of harps out there:

Weighing about 80 pounds, pedal harps have a total of seven pedals located at the base of the instruments.

Linking to disks located on the neck, these pedals each is assigned three different positions i.e. low with sharp or natural notes, middle and high.

A huge advantage that pedal harps offer is the ability to play any type of sound.

In addition, these most preferred types of harps offer the advantage of having your hands free without altering levers at some point while the instruments are playing.

Coming in a range of shapes as well as sizes, lever harps are fairly smaller than pedal harps.

In addition, these harps, which weigh between 20 to 50 pounds and are more portable and lighter than the rest.

Designed without pedals, lever harps are strung with gut, or steel strings and lack the ability to play flats and sharps without re-tuning the instrument, at base level.

Those sounds can be achieved by installing levers to manipulate the tension of the strings.

Harps that are deeply rooted in a given ethnic tradition can be classified as folk harps.

Such may range from 19 strings or less to 70 strings or more harps to lap or 6-feet tall harps.

Also, a wide range of harps with strings made out of steel, catgut, horse hair, silk or any other material may also fall into this category.

Folk harps weigh between 9 and 50 pounds, depending on the variety of the harp in question.

Looking almost similar to four-sided harps, lyre harps feature strings that look like they are open on all four of the instruments’ sides.

More recognizable to most individuals who are enthusiastic about harps, these harps date back to 32200 BC.

In addition, a good number of them have strings, which fit over the bridge and even across the soundboard.

Last but not least, lyre harps weigh between 7 and 12 pounds, depending on the model of the harp.

Plus, Celtic harps may feature blades instead of levers to achieve flats and sharps.

Finally, wire harps come with an average weight of up to 24 pounds.

How To Move Your Heavy Harp

The most common way of moving a heavy harp is laying the instrument flat, with the disc/lever side up inside your trunk.

However, it’s also possible to load a harp that’s too large and heavy upright with its column down on a soft pad (to prevent damage) within the trunk.

Nonetheless, if your harp isn’t too large to fit in your car, you can load it on its column and support it between your front and back seats.

Also, do not forget to protect your instrument with heavy duty cover during transit.

You should also try to move it gently while making sure to avoid any sharp knocks.

In addition, when moving a lever harp, you should lift the instrument rather than drag it along the surface, otherwise you risk breaking the legs of your priceless harp.

Harps are interesting musical instruments to play, dating back to thousands of years ago.

Today, these instruments  have evolved so much into different forms that we have several varieties of them, including the above.

When it comes to the question of how much does a harp weigh, there is no definite answer as these instruments can vary extensively in weight.