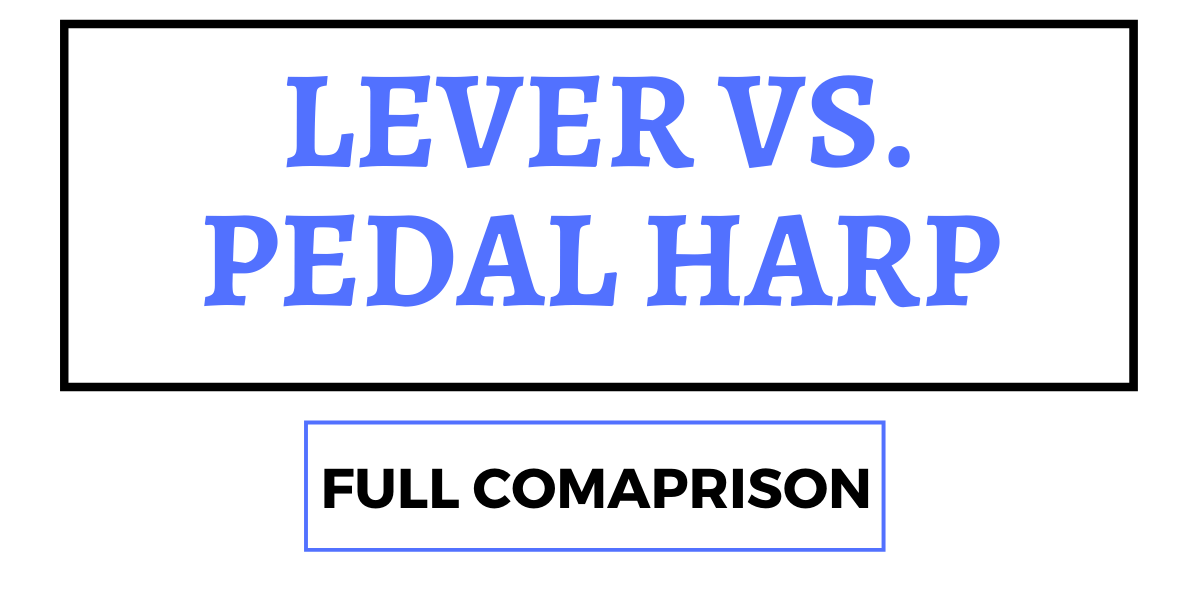 There are a wide variety of musical instruments, and one of the standard traditional instruments that have been on the market for quite a long time is the harp.

The harp is a musical instrument that consists of individual strings running at a given angle and is joined to the soundboard or sound box.

The equipped strings are plucked with fingers or other pieces when playing to make different musical sounds.

Harp musical instruments are categorized into two groups, which are the lever harp and the pedal harp.

What's The Difference Between A Lever Harp and a Pedal Harp?

When it comes to the number of strings equipped on both instruments, lever harp has lesser than the pedal harp.

The lever harp is estimated to have around 22 to 36 strings while, on the other hand, the pedal harp has approximately 44 to 47 strings.

This means that you can create more sounds using the pedal harp as opposed to when using the lever harp.

The lever harp is a bit lighter than the pedal harps.

This is because the pedal harps are designed in a larger size and also contains more strings as opposed to the lever harp.

The weight of a standard lever harp is estimated to be between 15 to 35 pounds, while a pedal harp has a weight estimate of between 70 to 90 lbs.

The cost for harp varies depending on the size, design and even the type.

Which one is more expensive?

But pedal harps are more expensive as compared to the lever harps.

This is because they are large and are more advanced as compared to the lever harp.

Lever harp is light in weight and features a compact design that is more comfortable and easy to transport around.

They are mainly used by live performers considering they are relatively easier to pack when transporting.

The pedal harp is mainly recommended for people who need a stationed or permanent harp because they are quite bulky.

They require large storage space when transporting and cannot be carried manually. You will need a trolley to move the instrument from one location to the other.

Therefore, if you need a portable harp, consider getting the lever harp.

The lever harp produces bright sounds, which are ideal for people who play folk music while the pedal harp instrument provides music sounds, which is mellower due to the large soundbox and the high number of strings equipped.

The lever harp instrument can play different genres of music but only a few notes of classical music.

This is because this type of harp has a small sound box and limited playing strings. It is mainly recommended for beginners who are learning how to play different keys on the harp.

On the other hand, the pedal harp can play different classic notes and all genres of music thanks to the massive sound box and a high number of strings.

Similarities Between The Pedal Harp and Lever Harp

Both of these types of harp are ideal for playing different kinds of music genres. Although lever harp cannot play all classical notes, it works perfectly for other genres.

Both types of harps require manual control when playing and changing the notes.

Both types of harps have strings connected to the soundbox used to play different notes.

What is a Lever Harp?

This is the type of harp instrument where the player uses a lever(s) to raise the notes on harp. Note that this type of harp raises and lowers the notes half step.

Advantages of a Lever Harp

One of the most outstanding features of the lever harp is the lightweight designs. They are quite light and small in size, which makes it easy and possible to move them around.

If you are looking for a harp at a budget, then a lever harp is the right model to buy.

This is because they are relatively cheaper than the pedal models since you can get a good piece at as low as 400 dollars.

Disadvantages of a Lever Harp

There is not much in terms of sound and notes one can achieve with the lever harp.

It has a small sound box and fewer strings hence cannot play all the classic sounds.

What is a Pedal Harp?

In the pedal harp, the player uses pedals to raise and lower the notes half the step.

Advantages of a Pedal Harp

The pedal harp is ideal for professional players since there is no limit to the music genre or classic sounds you can play with it.

It has many strings and large soundbox efficient for different musical sounds.

The pedal harp works correctly for multiple classic keys since it is easy to control because you don't need to move your hand when changing the notes, unlike on lever harp.

The pedal controls the notes on the instrument.

These two types of harps have both similarities and differences, which are quite notable when playing and in the design.

Which one should you learn first?

It really depends on what kind of harpist you want to become. If you want to play grand harps and play in front of thousands of people then probably the pedal harp would be best.

Going from one another is quite easy if you already know the basics of playing the harp.

These are the two types of harps you will find on the market.

They work differently in terms of control and sound production. If you are a beginner, a lever harp will work for you because it has minor keys, which are easier to learn.

This is also the right choice for people who need a compact and portable harp because it is easy to transport.

But pedal harps are the best choice for people who need a harp for playing different notes and sounds. It is a bit complex thus may give you a problem when transporting.