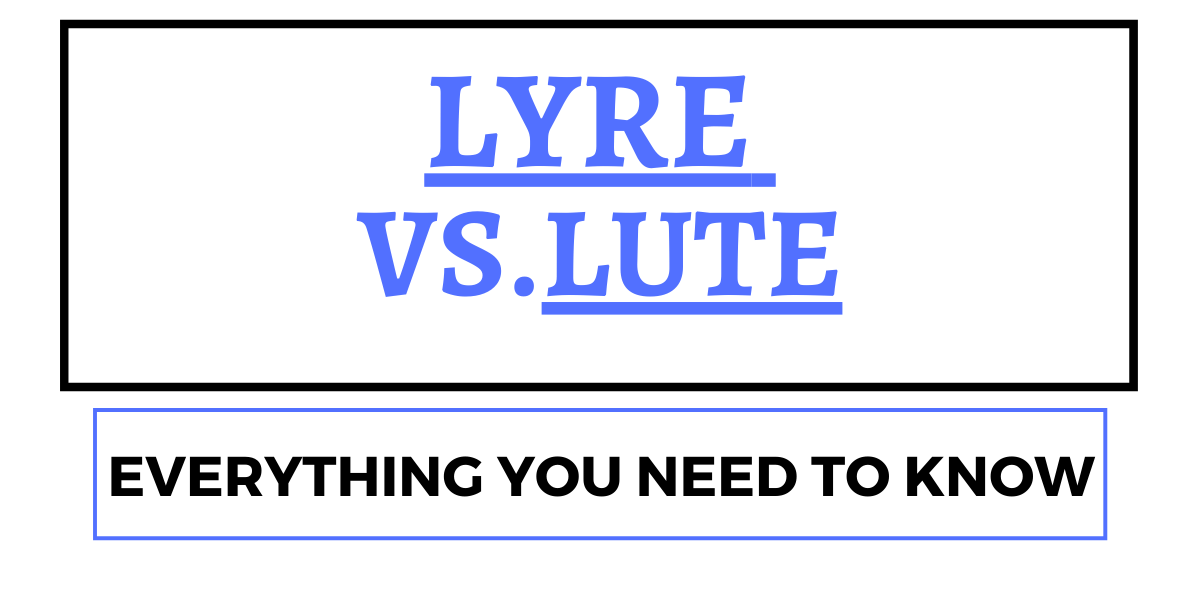 Even though the Lute and the Lyre harp are both stringed instruments they are quite different.

So let’s learn more about both these instruments.

The lute is a string instrument that comes with a neck and round back. It has a void cavity with a body opening. The instrument features strings and these are attached to posts located on its neck.

Also, the neck has some turning mechanism to help users to tighten or loosen the string tension.

Users can use one hand to hold the lute and the other to play with strings. For better usage, they can simply press different parts of the strings.

By doing so, they can produce lower or higher pitches. This feature makes it a versatile option for different varieties of music. When it comes to the look, it resembles a guitar design.

Currently, you will find many innovations in this musical instrument.

A Lute is associated with the history of ancient Europe. It has been part of the European culture since the 12th century.

However, it took longer to get the popularity in its birthplace. In the 15th century, it started receiving the desired appreciation. It was widely used in 1800.

In the twentieth century, it became a familiar name among music lovers across the globe.

The lyre harp is also a string instrument. The key difference between these two instruments is the size. The lyre is smaller in size and popular for its link with classical antiquity of Greek.

As stated earlier, lyre looks like a small and flat guitar and that can easily sit on your lap and the ground.

Lyre has a limited number of strings compared to the lute. Therefore, the functionality will be limited. Players can use it for some specific types of songs. Lyres are also less expensive than its competitor.

A lyre has a long history. It has been around before the creation of the lute. The earliest lyre appeared in the 1400BC.

However, it has experienced many changes during this long journey. In the earlier version, it had seven strings. Though lyre has a limited number of strings, it can vary from four to ten.

These are designed without a fingerboard and that also makes it a less popular option than a lute. A lute is more convenient than a lyre instrument.

Difference Between Lute and Lyre

A lute is a fretted string device that has a European origin. It comes as a soundbox or bowled-shaped body with a neck.

The strings are located on the neck. The lyre is an ancient instrument that also has strings. It features two arms that extend from its body to the strings and crossbar.

Both these instruments come with a different design to serve the same purpose. They can be used to play songs.

However, the options will be limited with lyre due to a limited number of strings.

Lyres come with a gentle curve and different strings to offer classical sound. It features a solid soundboard.

The lute comes with a short neck and bowl back with lacewood staves. There will be tied frets on the laceboard. It is known for its pleasant sound and versatility.

The strings are located closer and users can press the strings to get the desired pitch. It can be the best especially when you are looking for a versatile instrument to support different types of songs.

Which One Is Better?

The design of these instruments varies a little. However, both come with a small design to ensure easy usage.

They have strings to support different types of songs. If you are looking for an affordable, easy to use, and super compact instrument to play some specific songs, you can consider buying a lyre.

When you are prepared to spend a little more, you can go with a lute. This instrument can support most of your favorite songs. Both these are easily accessible in the current condition.

So, you want to know more about lute and lyre. You are interested in the effectiveness and usage of each to make a smart decision.

Both these instruments have some unique features. They are designed to serve some specific purposes. When the lyre is related to ancient Greek, the lute has a connection with European history.

A lyre is a small instrument that can fit your lap. However, the lute comes with a fingerboard.