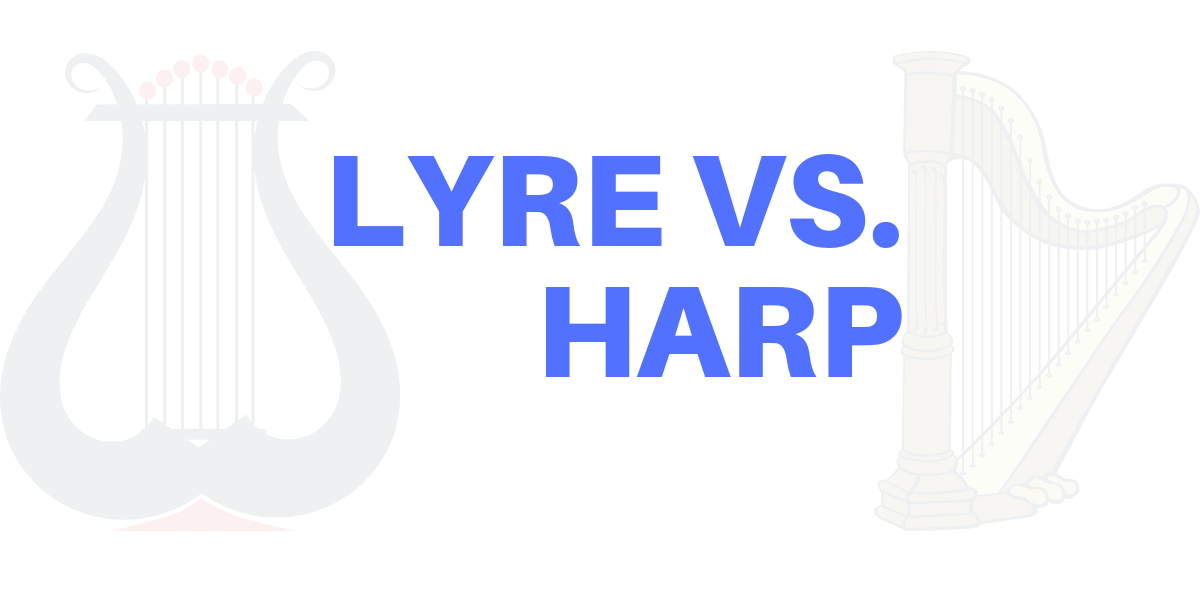 Lyre Vs. Harp (What’s The Difference?)

Lyre harps are a much smaller instrument and is carried in a person's hands more like a guitar than a normal harp which sits in the lap or on the ground.

They are much cheaper than normal harps and are mainly played by hobbyists or for much simpler playing. They are also limited in strings  so songs are limited.

On the other hand Normal harps such as lever and the pedal harps are played for much more hardcore harpists.

This article exclusively present to you detailed information cutting across the difference between the lyre harps and regular types of harps.

Difference between Lyre and the harp.

When lyre vs harp is concerned, some significant difference can be noticed. The most fundamental difference is that a normal harp has strings which enter directly into the hollow body of the entire instrument.

On the other hand, a lyre has it strings passing over a bridge which in return transmit the vibrations of the strings to the instrument body. A lyre, therefore, functions just like a modern guitar.

Generally, a vibrating string is a wave which propagates typically into a soundboard that amplifies the wave producing a sound wave. The sound wave is later transmitted through the air and eventually reach our eardrum. The sound is exceptionally versatile.

This means you can play almost every type of harp, especially the pedal harp. The music-sound is pretty pleasant and enjoyable.

The lyre harp, on the other hand, produces a sound that lacks enough projection. The music mostly remains inside the box, and this necessitates the need to use amplifies such as microphones for the crowd to hear it more clearly.

In terms of origin, the lyre we see around is the evolution from the ancient harps. The evolution into the modern lyre was brought in by the popular cultures of the specific community such as the nomads of the ancient Middle East to create and enjoy an instrument that resembles a harp and which is more portable.

So, in terms of origin, the lyre harps are a more incredibly ancients tool of music which were used about 3300 BCE and 300 BCE. Lyre harps were built on rock etchings and were very instrumental in ensuring good music sessions.

The ancient lyre harps are located in areas of Megiddo and parts of northwestern Valley of Jezreel of the old Israel while regular lyres are found in almost every corner of the world.

Lyres have been in use for musical entertainment as far back as ancient Greece where it was a popular musical instrument. The Hebrews were also known to have used the lyre harps thanks to biblical accounts of both their music and poetry.

People in other cultures, such as those around the Mediterranean and the Middle East, use lyres to perform traditional songs. People are always challenged with a question to justify the difference between a lyre harp and the regular harps.

A normal lever/pedal harp is designed according to the needs of the performer. They are a lot bigger in size, a little bit weighty and strings controlled the levers or pedals. Lyre harps are also tiny in size, but pedals control the stings.

Which is the best to learn first?

Musicians and people who love music instruments are always faced with statements on whether to get into normal types of harps like pedal/levers or the lyre harp.

Ideally a music instrument you feel best when playing and the sound you intend to have at the end should be what to buy.

Mostly a lyre is what people should buy if they just want something that’s relatively cheap and pretty easy to get into. It is cost-effective, readily available, and easy to use.

If you want to take the harp seriously then we suggest getting into the lever harp and learning the in’s and out’s then graduating from the pedal harp.

Additionally, they are more modern and can be used to play a variety of music tunes.

Both regular and lyre harps are stringed instruments and use similar techniques to shorten the strings by plucking a detailed note on strings. Even though the two instruments function almost the same, the difference is enormous to know which one to learn first.

Lyre vs. Lute: Everything You Need To Know

How To Record a Harp: (Complete Guide & Expert Tutorial)

How To Amplify a Harp: (The Ultimate Guide)