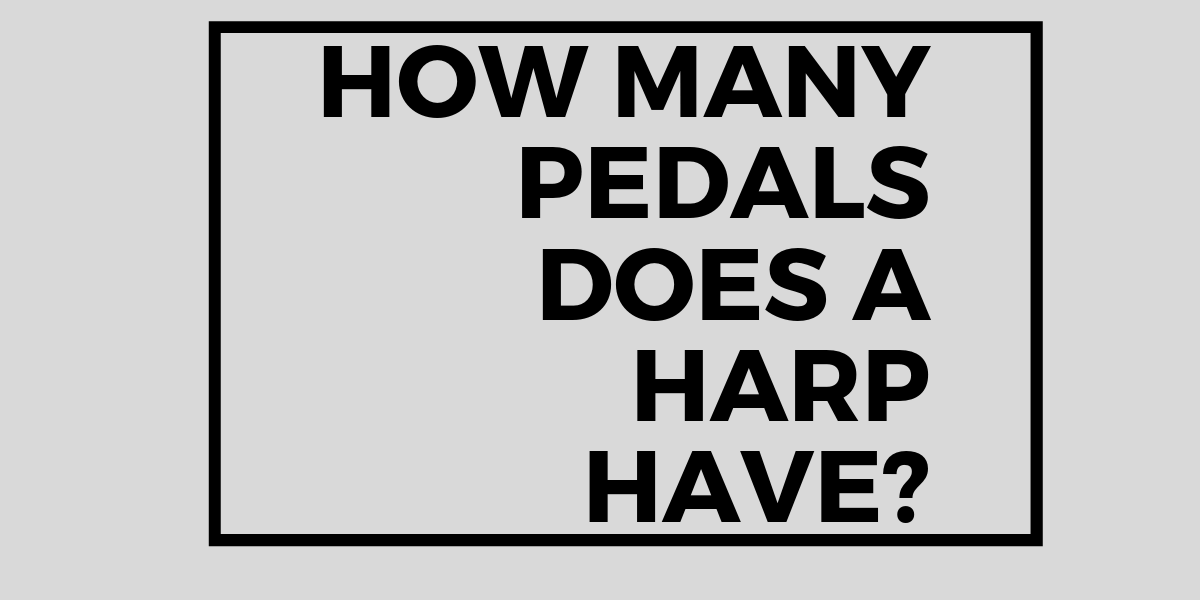 The harp is a beautiful instrument that has found its way not only into classical music but modern music as well. Artists as diverse as The Beatles, Bjork, and Florence & the Machine have integrated harps into their music.

So how many pedals does a harp have? Seven. Think of a musical scale which has seven notes. Each of these notes has a pedal that corresponds to it - C, D, E, F, G, A, B - with C, D, and B having pedals on the left side of the harp and E, F, G, and A on the right.

A cable is connected to each pedal and runs up the hollow pillar of the harp where it is attached to a disc which rotates position as the pedal is pressed.

This disc rotation shortens or lengthens the string for its note in each octave depending on how the pedal is pressed.

This rotation alters the note between neutral, flat, and sharp. The pedal can also be secured into a neutral, flat, or sharp position so that the foot does not have to hold it.

The Harp and its Pedals

Early harps had to be hand-tuned to change the key to match that of the piece being performed. In fact, the earliest harps were rarely used in classical music; its inability to change keys proving to be a hindrance.

While the earliest pedal harp was first seen in 1697, it wasn't until the 19th century that it was modified enough to be integrated into modern orchestras with only a handful of classical compositions including it; mainly well-known composers such as Mozart (Concerto for Flute, Harp, and Orchestra in C) and Handel (Concerto for Harp and Orchestra).

As the instrument evolved, there needed to be a way to change the strings' pitch quickly.

The earliest version of the pedal system began in Austria, with more refined versions being developed throughout Europe as a practical solution to the problem of quickly changing pitch and introducing chromatics or half steps into harp compositions.

This system was fine-tuned throughout the 18th century, resulting in the most common modern-day concert harp that we now know.

There are several types of harps that do not use pedals for chromatics; in other words, to change pitch. The Welsh triple harp & the cross-strung harp are two examples.

These have additional strings that can be used to change the note from neutral to flat or sharp much like the black keys on a piano.

Another type is the lever harp (also called a folk, Celtic, or Irish harp) which has a lever for each string. When flipped, the lever shortens or lengthens the string to alter the pitch.

The harp holds a long history across centuries and continents from simple stringed bows to the modern harp we now know.

With the modern pedal system, the harpist is able to play more complex pieces, allowing more and more composers to add an interesting flavor of harp music to their compositions, bringing its music to new generations.

Know how many pedals a harp has is critical when you are starting to learn about the harp. Maybe you are just starting out or you have already mastered some of the other harps out there like levers but whatever the case we hope you found exactly what you needed to further your career has a harpist.

Q: How many notes are on a harp?

A: A Concert harp has about 47

Q: What family is the harp in?

Q: How many strings should a beginner harp have?

A: About 34 strings to get from total beginner to somewhat advanced before progressing to a bigger harp with more strings and notes